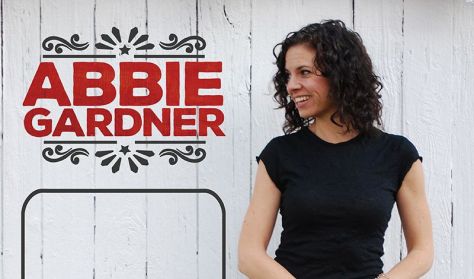 Abbie Gardner is a fiery dobro player with an infectious smile. Whether performing solo or with Red Molly, her acclaimed tales of love and loss, both gritty and sweet, are propelled by her impeccable slide guitar playing. Solo performances feature truly unique use of the dobro as a solo instrument, bouncing between a solid rhythmic backbone and ripping lead lines, all in support of her voice and songs. An award-winning songwriter, Abbie's solo tour highlights include Falcon Ridge, Clearwater, VA Arts Festival, The Kate, Passim, Godfrey Daniels, Uncle Calvin’s, The Spire and a formal showcase at the 2018 Folk Alliance Conference. No Depression says she displays “uncommon versatility” on her latest CD Wishes on a Neon Sign (released January 2018). The recording features 12 original songs and a co-write with Chris Stapleton. WFUV's John Platt raves, “she’s not only a first-rate Dobro player, but a songwriter to be reckoned with."