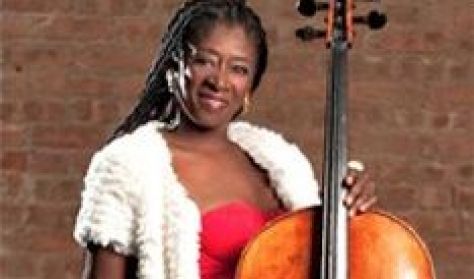 Past, present, and future glide together with uncommon grace on cellist Akua Dixon’s sublime new album Akua’s Dance, a project that brings her sumptuous sound firmly to the foreground. Dixon’s third recording for her Akua’s Music label features the jazz string…

Past, present, and future glide together with uncommon grace on cellist Akua Dixon’s sublime new album Akua’s Dance, a project that brings her sumptuous sound firmly to the foreground. Dixon’s third recording for her Akua’s Music label features the jazz string pioneer on an enthralling array of material that encompasses exquisite balladry, the music’s deepest roots in African and African-American culture, and instrumental pieces gleaned from Dixon’s opera-in-progress.

“The music progresses from where I was to where I’m going,” says Dixon, who notes that her last release, 2015’s critically hailed album Akua Dixon, was a string-centric recording that featured her “in a sectional way,” Dixon says. “On this one I’m out front with the rhythm section.”

And what a rhythm section! Seven of the 10 tracks feature her stellar working quartet with guitarist Freddie Bryant, bassist Kenny Davis, and drum maestro Victor Lewis, whose voluminous credits include classic sessions by Woody Shaw, Stan Getz, Carla Bley, and Bobby Watson. If she sounds particularly mellifluous and muscular, it’s because Dixon exchanges her cello for a baritone violin built by the late luthier Carleen Hutchins, “an instrument with the same tuning as my cello but a larger, deeper sound,” Dixon says.

“The baritone I’m playing is the first that she made and I’ve had it since 1989. It has a thicker body and works great to play duos with a horn. I recorded on it with Henry Threadgill and performed on it in JALC’S Duos on the Hudson series with Chris Potter playing tenor sax. I wanted some more power.”

On three pieces Lewis and Dixon (on cello) are joined by guitar ace Russell Malone and bass legend Ron Carter, with whom she first performed some four decades ago on Archie Shepp’s epochal 1972 Impulse! album The Cry of My People (when she was known as Patricia Dixon). “That was a memorable session,” Dixon says. “But I’ve never had a chance to work with Ron playing my music, so I reached out to him. If you don’t ask you don’t receive. I was pleasantly surprised by his response.”

She makes the most of Carter’s poised virtuosity, showcasing his gorgeous bow work on “Afrika! Afrika!,” an arrangement gleaned from a three-movement orchestral composition Dixon wrote in response to a 1972 trip to Ghana. His resonant notes undergird the rapturous ballad “If My Heart Could Speak to You,” a piece by Dixon’s college friend Aziza Miller (who spent many years as Natalie Cole’s music director). And Malone provides a firm but delicate pulse on Dixon’s playful, sing-song waltz “Orion’s Gait,” a tune inspired by her son during his adolescence.

The album opens with Dixon’s “I Dream a Dream,” a piece she repurposed from her opera based on the life of 19th-century New Orleans voodoo queen Marie Laveau. “This dance rhythm has roots in many parts of Africa and wherever Africans were taken,” says Dixon. “From Guinea West African Malinke music to Brazilian Baião, you’ll find this beat.” “Akua’s Dance” is another tune drawn from the opera, and its terpsichorean groove was inspired by Dixon’s gigs performing for dancers at African-American socials. “Everything you play has to be danceable,” she says. “Dance was at the foundation of this music.”

If the album has an emotional centerpiece it’s Abbey Lincoln’s “Throw It Away,” a song that’s become a bona fide standard in recent years. It’s the only piece featuring Dixon’s vocals, a creative avenue she’s largely abandoned of late, though her soulful rendition might lead some to question that decision. Dixon offers the performance as a tribute to the late singer/songwriter, an artist she saw perform often and collaborated with on her penultimate album, 2003’s It’s Me (Verve). “I always loved her music and admired her fortitude,” Dixon says. “As a songwriter she was in a guys’ world in a lot of ways. Watching her stay herself and express herself was very inspirational.”

The album closes with several pieces that embody the sacred and secular sides of African-American culture. Dixon delivers a slinky version of Sade’s “The Sweetest Taboo,” a performance that ranks among the sexiest ever offered on cello (well, baritone violin). Saturday night revelry gives way to Sunday morning revelation with a reverent rendition of the Negro spiritual “I’m Gonna Tell God All of My Troubles” that basks in the baritone violin’s voluptuous lower range. The Freddie Bryant arrangement hits close to home, as his mother, the great operatic soprano Beatrice Rippy, performed the song at Alice Tully Hall. “I always like to include a spiritual,” Dixon says. “It’s an important part of my legacy. You have to know where you came from to know where you’re going.”

Akua’s Dance represents a significant step in synchronizing Dixon’s discography with her stature as a seminal jazz cellist. Born and raised in New York City, Akua Dixon grew up in a family suffused with music, starting with her early experience singing in the Baptist church. She forged her most profound and enduring creative relationship playing at home with her older sister, the late violinist Gayle Dixon, shortly after the cello came into her life in the 4th grade.

“The connection was really deep,” Dixon recalls. “If I didn’t play well, she wouldn’t let me play with her. And as we got older we always played together. As teenagers we got together with friends on weekends and instead of going out to the park we’d play string quartets. By junior high we were playing little gigs, and in high school I started freelancing seriously.”

After graduating from the prestigious “Fame” High School of the Performing Arts, Dixon studied at the Manhattan School of Music when the only track available for cellists centered on European classical music. But the pit band at the Apollo Theater provided a rigorous course of study in popular African-American styles. Backing a disparate array of stars from Rev. James Cleveland and Barry White to James Brown and Dionne Warwick, Dixon developed a vast idiomatic repertoire. After Sammy Davis Jr. insisted the Westbury Music Fair include African-American musicians in the orchestra, Dixon worked with numerous major acts at the theater. Before long she broke into Broadway pit bands, playing a series of long-running shows such as Liza Minnelli’s Liza with a Z, La Cage aux Folles, Cats, Doonesbury, and Dream Girls.

With the doors of most symphony orchestras closed to African-American musicians (to say nothing of women), Dixon found a home in the Symphony of the New World, which is where she experienced the epiphany that led her to jazz. While performing a new work by Duke Ellington, who had supported the creation of the orchestra, Dixon realized she hadn’t “studied the music of my own heritage,” she says. “I started immersing myself in jazz and spirituals, and became determined to learn the secrets of improvising.”

Dixon was at the right place at the right time. In the early 1970s the New York scene was exploding with creatively ambitious and talented string players, many of whom gathered in the String Reunion, a 30-piece orchestra founded by Noel Pointer. She served as ensemble’s director of new music, supplying the group with a steady stream of original compositions and arrangements. At the same time, Dixon launched her own string quartet, which made its big league debut at the Village Gate. With sympathetic string players at their service, jazz giants like Archie Shepp, Rahsaan Roland Kirk, Woody Shaw, Jimmy Heath, and Frank Foster started including violins, cellos, and violas in the arrangements. “There were so many opportunities for interesting work,” Dixon says.

She collaborated closely with another jazz giant in the early 1980s as a founding member of the Max Roach Double Quartet. After years of lending her skills to recordings by masters such as Don Cherry, Buster Williams, Charles Tolliver, Carmen McRae, Dizzy Gillespie, Tom Harrell, and her former husband Steve Turre, Dixon made a bold statement of her own with 1994’s Quartette Indigo (Landmark), an acclaimed album featuring violist Ron Lawrence and violinists Gayle Dixon and John Blake Jr. (reissued by 32 Jazz). She delivered a brilliant second album in 1997 with Afrika! Afrika! (Savant) with Lawrence and violinists Regina Carter and Marlene Rice.

She spent much of the next decade immersed in education, working as a Musical Ambassador to New York City for Carnegie Hall Education and performing for their Neighborhood Concert Series as well as Jazz at Lincoln Center’s Jazz In The Schools tours. Dixon developed the Hip Hop Blues Project and composed an original work for string students in New York and New Jersey to perform each year. During that time she was an active freelancer locally, including recording and writing string arrangements for The Miseducation of Lauryn Hill and Aretha Franklin’s A Rose Is Still a Rose. Dixon also notated and conducted a new ballet, “Riverside,” by Judith Jamison and Kimati Dinizulu, for Alvin Ailey American Dance Theater’s 1995 premiere at City Center in New York.

With the release of 2012’s Moving On and 2015’s Akua Dixon, Dixon refocused her priorities and put her own music on the front burner.

“It’s been a calm couple of years,” says Dixon, who recently resettled in Rhinebeck, New York. “I’m working on The Opera of Marie Laveau, a project I started a long time ago. A commission from the Rockefeller Foundation made it possible to workshop and perform a reading of the first half of the Opera at the New Federal Theatre in New York City in 1989. Now that my children are adults, I’m not doing theater or those kinds of jobs, and I can keep a different kind of focus. I recently completed the second half of the opera since moving to Rhinebeck.”

With the intimate and exquisitely lyrical Akua’s Dance Dixon is clearly keeping her eye on the little gems as well as Marie Laveau’s glittering crown.