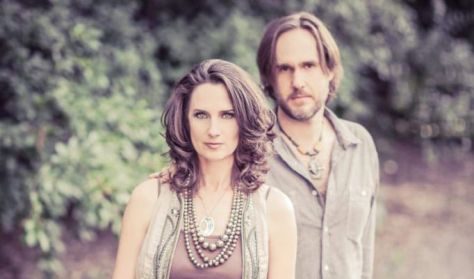 Bettman & Halpin play original Folk/Americana. Their concerts combine high-energy upbeat bluegrass/roots inspired compositions, beautiful ballads with soaring vocals and heartfelt lyrics, and groovy feel-good songs that audiences will be singing in their heads for weeks thereafter. Interspersed between these songs and instrumentals, they tell stories. They have become…

Bettman & Halpin play original Folk/Americana. Their concerts combine high-energy upbeat bluegrass/roots inspired compositions, beautiful ballads with soaring vocals and heartfelt lyrics, and groovy feel-good songs that audiences will be singing in their heads for weeks thereafter. Interspersed between these songs and instrumentals, they tell stories. They have become as known for their storytelling and playful banter as well as for their hooky whole-hearted songwriting and instrumental wizardry. They have been touring as a duo since 2008, and incorporating a trio and quartet since 2013.

Bettman & Halpin have a well-earned reputation for hypnotizing performances filled with irresistible lyrics, transcendent harmonies and roof-raising instrumentals. They have twice been a featured act at the Walnut Valley Festival in Winfield, KS along with musical heroes Byron Berline, Michael Martin Murphy w/ Pat Flynn, and Tommy Emmanuel. They can also be found performing at various arts centers throughout the US and abroad. Their music creates a fully acoustic, delightfully eclectic sound far greater than the sum of its parts: taking the listener from up-tempo down home fiddlin', to soulful sorrowful ballads, to super hooky folk/pop with catchy melodies and lyrics that will stick with you long after the concert is over. Touring together since 2008, Bettman & Halpin have been recognized in various Regional and National competitions, including:

"That Stephanie Bettman has reached a level comparable to others like Emmylou Harris, Joan Baez and Alison Krauss so quickly it's a bit uncanny."-Country Jukebox

"Just as (Emmylou) Harris made her mark, Bettman is surely going to make hers..."-Today's Country

"Bettman jams it up like few others as she leads an ensemble with great imagination."- Maverick Magazine, UK

"...Each song took me to a place to which I wish to return to again and again. And I guess that is why it really does come back, comes back to a great love for what music can do. GET THIS CD!! Highly recommended!"- Rik James, Americana Backroads KGLT-FM

"...A platform for Bettman’s emotive, Joan Baez-inspired vocals, as well as her award-winning fiddle playing, and Halpin’s head-spinning mandolin and guitar picking, and his velvety, close harmonies..."- Music News Nashville

Stephanie Bettman is a true triple threat. An accomplished writer, singer, and fiddler: her lyrics are infused with wit and wisdom, poetry and insight. Vocally she draws comparison to the soaring soprano of Joan Baez and the plaintive emotion of Emmylou Harris. Meanwhile, her fiddling, which combines elements of bluegrass and jazz, is inspired by such masters as Stephane Grappelli, Byron Berline and Johnny Gimble. A former actress and trapeze artist, Ms Bettman is at ease in front of an audience and creates authentic intimacy with her crowd no matter the size.

Luke Halpin is a renowned multi-instrumentalist. A master of the guitar and the mandolin, impressive on fiddle, banjo, and adept at nearly anything he picks up. Halpin draws inspiration from the likes of Sam Bush, Mark O’Connor and Tony Rice and holds his own in comparison. A dynamic and sensitive vocalist himself, the harmony blend he and Ms Bettman achieve is chilling and at times simply transcendent. Halpin has a long history in the music biz, having shared the stage with the likes of Merle Haggard, Lone Star and The Steve Miller Band (to name a few). His quirky sense of humor is a perfect foil to Stephanie's dry witty presence.

Phil Norman is performer dedicated to redefining cello playing. He draws from diverse influences to give "cello playing a modern flair" (Marquee Magazine, January 2013) such as Mark Sumner (Turtle Island Quartet) and Rushad Eggleston (Darrol Anger & Crooked Still). Classically trained with a degree from the University of Colorado, he has studied jazz with pianist Russell Schmidt and violinist Glenn Basham, and has since been immersed in alternative styles of cello playing.  He is an active performer in the Front Range of Colorado has been playing with Bettman & Halpin since 2013.  He has performed concerts in the United States, Italy, and Australia, has appeared on stage with composer and pianist, Carter Pann, guitarist Grant Gordy, and Bonnie Carol, and was a Featured Artist for TEDxBoulder.

Carl Sorensen is one of the Denver's busiest drummers. He joined B&H in late 2013. Known for his ability to find the perfect groove with any style, Carl has played on hundreds of stages all around the country including Denver's famed Red Rocks. He has been playing drums and percussion since the fifth grade, and studied at Berklee College of Music in Boston under Jamey Haddad (Paul Simon and Yo Yo Ma). After thousands of hours playing drums, he has developed his own style, reminiscent of Ringo Starr or Levon Helm; simple but perfect. Carl has played in more than 65 different bands at the same time since 2008, enjoying the challenge, and the musical diversity.