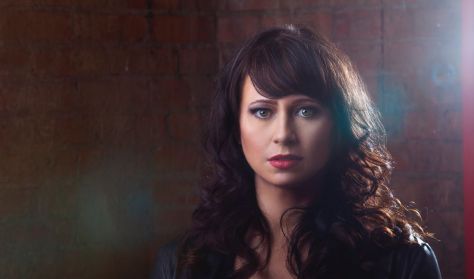 As a child growing up in the tiny town of Niceville, Florida, McKinney transplant and country singer-songwriter Crystal Yates couldn't avoid the twangy sounds of country music even if she had wanted to. "My mom says I could sing 'Why Don't You Love Me' by Hank Williams before…

As a child growing up in the tiny town of Niceville, Florida, McKinney transplant and country singer-songwriter Crystal Yates couldn't avoid the twangy sounds of country music even if she had wanted to. "My mom says I could sing 'Why Don't You Love Me' by Hank Williams before I could say my ABCs," explains the powerfully-voiced, dark-haired singer.

Although the classic canons of Merle Haggard and George Jones had been memorized in her younger days as she also began delving into the work of Shel Silverstein, it was her first musical purchase of an early Whitney Houston album that laid out the roadmap of classic country storytelling and bold vocals that she's followed ever since.

Later this month, on October 21, Yates' stunning EP, I Believe, her third record, will be released and Yates, now in her mid-30s, can continue on what has been a remarkable journey over the past five years. Upon leaving Florida to pursue her dreams in 2009, Yates and her husband, Will -- who was her college sweetheart and is now her guitar player as well -- took a leap of faith which led them to McKinney. Along every step of the way, Yates was looking for the right opportunities to present themselves.

A major opportunity for Yates was delivered via a gloomy goth girl, clad in all black after a gig last year. The mystery girl confessed to having a mother who performed country music and let Yates know about the Texaco Country Showdown, a nationwide country talent contest consisting of thousands of entrants and many rounds of competition over a few months each year. Though mega-stars such as Brad Paisley and Garth Brooks have won at least one round of the 32-year-old contest, Yates was hesitant. She had already vowed not to traverse the burgeoning talent show and singing competition route in order to further her career, so she and her husband more or less brushed it off -- until the topic of theShowdown was brought up to her after each of her next three shows.

"I looked up the information on the Showdown,and found out the next leg of the competition was going to be held in Paris, Texas," she explains. "So I called the radio station that was sponsoring it, and they told me what to do and where to go. We sang two songs we had written for a friend who had recently been divorced, and lo and behold, we won that round of the competition."

As each round of the Showdown turned into a victory for Yates, who brought Will to play guitar at each performance instead of using the house band at each venue, she grew more confident. The stages became bigger with each successful round, too, as the couple played Billy Bobs' Texas and eventually found themselves in country music's mother church, the Ryman Auditorium in Nashville for the championship round. Again, Crystal and Will performed as a duo, establishing themselves as a unique act which wasn't interested in the usual conventions of modern country music. The panel of judges, including the president of the Grand Ole Opry, was impressed as LeAnn Rimes announced Yates as the winner in January of 2014.

While winning the $100,000 cash prize that goes with the title of the Showdown is likely the pinnacle for most artists' careers, the Yates have responded by working that much hard to capitalize on the success. Such is the mindset an independent artist needs when going after an in-demand producer -- especially when that producer is Charlie Peacock. As a Nashville-based jazz musician that's found his way to the top of both the Contemporary Christian Music and pop worlds as the producer behind both Civil Wars albums, including the Grammy-winning Barton Hollow , Peacock is, needless to say, a busy fellow. But Yates used a loosely threaded connection to get him to work with her on a new EP.

"I have been a part of the Art House Dallas organization for a few years, and Charlie is the founder of the Art House America organization," Yates says. "I am a huge fan of Charlie's work. When I won the Showdown, Charlie was my dream producer to work with, and I thought, 'Why not at least shoot for the moon and ask to see if he'd be interested?' I emailed him, and to my surprise, he emailed back and asked, 'How do you imagine me serving you?' I might have ran in place and gotten a little giddy."

The result of the Peacock-produced sessions, which took place over two weeks last February and March in Nashville, is I Believe. The album's five polished but not oily-slick songs combine to make a strong statement that doesn't blur any genre-lines or leave anyone wondering just "how country" these songs are. Yates is quick to give a great deal of credit to the direction Peacock provided during the recording, which featured a veritable all-star cast of Music City session players.

"Charlie is a very quiet and thoughtful man, and the players he pulled in were incredible," she says. "The sessions could not have been easier, particularly because he is very much about letting the musicians create, experiment and craft sounds on their own."

The EP's stand-out track, "Let That Record Play On," is a menacing, blues-inflected number that oozes soul. And the collection's single, "Goodbye Letter," which is getting some airplay around the state already, is a delicate, folky, heart-breaking number that serves as a fine vehicle for Yates' beautiful voice. Song for song, I Believe, is as impressive of an offering as there's been in the regional country realm this year.

With tour dates to celebrate the EP's release scheduled for both Texas and near her old home in Florida, including an opening gig for Martina McBride, Yates is ready to make her biggest artistic mark yet. And she's convinced that her mark will be different from that of many others.

"I love some of the newer songwriters like Brandy Clark and Kacey Musgraves," she says. "And I'm also a fan of powerful voices like Aretha Franklin and Whitney Houston. I want to honor those attributes, but I want to connect with people on a heart level. It's important for me to deliver songs and performances that touch the soul; that's why I do this." She adds, with an innocent chuckle, "I love to make people cry."