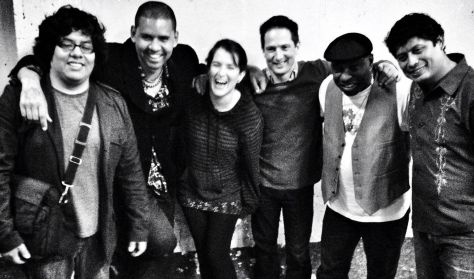 “The Afro-Peruvian Sextet is writing a new chapter in the history of Latin jazz.”
– Doug Ramsey, Rifftides

The Afro-Peruvian Sextet was established in 2005. The ensemble’s insistently inventive program of traditional Afro-Peruvian music transformed by Gabriel Alegría’s highly…

“The Afro-Peruvian Sextet is writing a new chapter in the history of Latin jazz.”
– Doug Ramsey, Rifftides

The Afro-Peruvian Sextet was established in 2005. The ensemble’s insistently inventive program of traditional Afro-Peruvian music transformed by Gabriel Alegría’s highly personal synthesis of folkloric Afro-Peruvian rhythms, jazz, and other musical strains has led to a signature accomplishment: developing the band’s patented blend of deep scholarship and playfulness into a touring experience that conveys a vast knowledge of the music and, perhaps more importantly, transmits black music from coastal Perú as a way of life to its audiences.

Each member of the Sextet is not only a master musician but also a dedicated and experienced educator. During more than ten years on the road together, the mission of the band has incessantly been to spread the joy and love of Afro-Peruvian music around the world. This has happened both on the stage and through workshops, master classes, after-hour hangs and even cooking (as food and music are inseparable in Afro-Peruvian musical culture, the band is never shy to demonstrate!) As trumpet master Bobby Shew once commented “hanging out with these people is a chapter in your life!”

The Afro-Peruvian Sextet has produced five CDs, one DVD and one vinyl record to date. Their audiences come from all over the globe and include a legion of dedicated fans who work directly with the band on various projects including concert promotion, merchandise sales and most notably, Tour Perú, an innovative concept by which fans of the band literally join the musicians on the road in Perú once per year.   With home bases in Lima and New York City, the band has been embraced by both cities. In 2015 Hot House Magazine awarded the band New York City’s “Best Ensemble of the Year” award and the New York City Jazz Record “Best Latin Jazz Album.”

The band has successfully developed and consolidated a thriving “scene” around Afro-Peruvian jazz music. The Latin Jazz Network described the band in this way: “Every once in a while there comes a musician who, when playing his or her chosen instrument, seems to carry within a vital life-force that is irrepressible.”

Amidst the Afro-Peruvian Sextet’s detailed fusion of Afro-Peruvian rhythms and jazz harmonies, lies a very demanding, authentic and honest interpretation.  The New York Times writes “the Sextet knows its mission well and has the execution down to a science.” “Peruvian trumpeter Gabriel Alegría champions Afro-Peruvian music,” wrote Downbeat Magazine in a prominent review, “the hip asymmetrical bass line of Alegría’s El Norte is goaded by wonderful hand percussion and stickmanship on cajita from Hugo Alcázar and Freddy “Huevito” Lobatón.”   Latino Magazine described the music as “rhythm-saturated, orchestrally-enticing performances that are the definition of sonic joy” while the Wall Stree Journal echoed with “a highly sympatico blend of North American improv and South American beats.”

Support for the band in their native Perú is also significant. Dedicated “Fans & Voluntarios” sign up on each of the band’s tours to work shows, sell merchandise and participate in the band’s social outreach missions. Local media and press have followed and documented the development of the band. The country’s most important newspaper, El Comercio describes the Afro-Peruvian Sextet as “the catalyst that marks the start of Afro-Peruvian jazz music’s flight to the international stage.”

The Sextet is busy working towards future projects that include the next Tour Perú, and launching another recording project. Current performances are listed on our tour calendar. Opportunities for fan participation abound so drop the band a line or join us on Facebook.

PIER FEST (Every Friday in August)