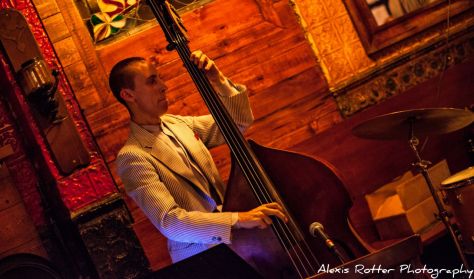 Bassist Ian Kenselaar is a proud New Jerseyan. He began studying music at age 11 in 2004. Mentor James Buchanan introduced Ian to a jazz program at NJPAC in Newark, directed by tenor saxophonist Don Braden. Jazz House Kids -- a community arts organization lead by bassist Christian McBride and Melissa Walker -- was another important institution in Ian’s early education. There, Ian formed his first deep connections and began a lifelong journey into this music.

Ian went on to study at Mason Gross School of the Arts at Rutgers University, with bassist Kenny Davis, drummer Victor Lewis, and altoist Mark Gross. In 2014 Ian moved to Jersey City to be closer with master drummer and bandleader Winard Harper, who would become another source of great inspiration. Harper hosted a twice weekly jam session and interview series at Moore’s Lounge in JC where young musicians could cut their teeth and learn real lessons on the bandstand from more seasoned players. Some of the guest artists Ian got to play with here include drummer Billy Hart, and tenorman Stacy Dillard, and pianist Norman Simmons. In 2017 Harper selected Ian to be one of twelve national recipients of the Ravinia Steans Music Institute Fellowship in Illinois where he spent a week studying composition with bassist Rufus Reid, pianist Billy Childs, and tenor saxophonist Nathan Davis.Over the past two years, Ian has also worked with the Princeton University jazz program, under the direction of Rudresh Mahanthappa with ensembles lead by guest artist Danilo Perez and vocalist Jay Clayton. Currently, Ian is working with tenor saxophonist JD Allen and is proud to be presented on his forthcoming album. Ian looks forward to a busy itinerary in 2019 and will be working hard and taking no prisoners!