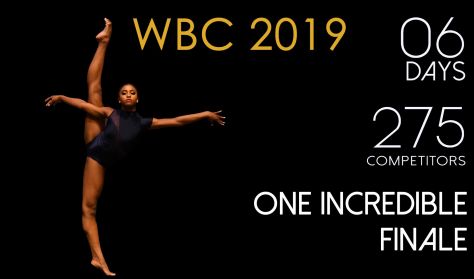 The week-long “Olympics of Dance” culminates with a star-studded evening of magnificent performances from globally recognized talent and WBC soloists and ensembles. Matt Palm of the Orlando Sentinel, named the evening “A steady stream of wow-wow-wow.”  more

The World Ballet Competition opens on Monday, April 22 and continues with four days of intensely competitive and juried solo, partnered and ensemble performances. The elite group of ballet dancers, representing 25 countries, will compete for more than $300,000 in scholarships, cash prizes and contract offers from dance companies around the world. Now in its 13th year, the World Ballet Competition continues to attract leading celebrities from the global dance industry while furthering the careers of future artistic talent worldwide.

The week-long “Olympics of Dance” culminates with a star-studded All Stars Performance finale on Saturday, April 27 at the Orange County Convention Center. Matt Palm of the Orlando Sentinel, named the evening “A steady stream of wow-wow-wow.” Central Florida Ballet, producers of the famed WBC, have selected an impressive roster of all-star performers for this year’s event:

Dusty Button, an International guest artist who moved to New York City at the age of 16 to train at American Ballet Theatre's Jacqueline Kennedy Onassis School. Ms. Button completed her training with London's Royal Ballet School on scholarship, graduating with honors and was presented with the Dame Ninette de Valois bursary and featured on the 2015 Pointe Magazine cover where she was labeled as "A New Brand of Ballerina.”

Taras Domitro, originally from Havana, Cuba he is a former Principal Dancer with the San Francisco Ballet. Mr. Domitro’s repertory includes Balanchine’s Emeralds, Ratmansky’s Russian Seasons and Shostakovich Trilogy. He received a 2008 Gold Medal at the World International Ballet Competition in Orlando and the grand prix at Peru’s International Ballet Festival in 2003.

Jorge Barani, a soloist with the Cincinnati Ballet and graduate of the National School of Art Ballet in Havana, Cuba. After coming to the United States in August 2012, he performed at the YAGP gala in New York with Maria Kochetkova. He was the recipient of two Gold Medals at the World Ballet Competition USA and the Silver Medal at the Korea International Ballet Competition. Mr. Barani’s leading roles include Peter Pan, Beauty and the Beast, Paquita, and Don Quixote.

More information about the World Ballet Competition can be found at worldballetcompetition.com