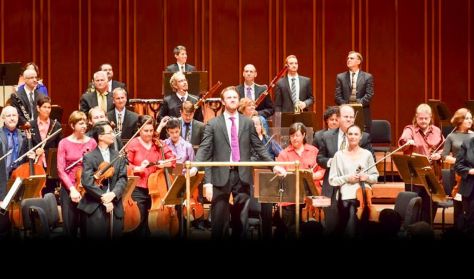 Enjoy our EMMA tradition of a Holiday Pops Concert and sing-a-long with the Jacksonville Symphony this holiday season.

As Music Director Courtney Lewis begins his fourth season at the conductor’s podium, the Jacksonville Symphony celebrates an expanded 2018-2019 season that promises more weeks of music reaching more people than ever before.

The Symphony is also the community’s leader in music education for children, serving four county school districts. In addition to offering free tickets to children under the age of 18 for selected Masterworks, and other special youth pricing, there are several programs to foster music education.  The Jacksonville Symphony Youth Orchestras, under the direction of Assistant Conductor and JSYO Principal Conductor Deanna Tham, performed in L.A.’s famous Frank Gehry-designed Walt Disney Concert Hall this June as one of just three student orchestras invited to perform in the Los Angeles International Music Festival.