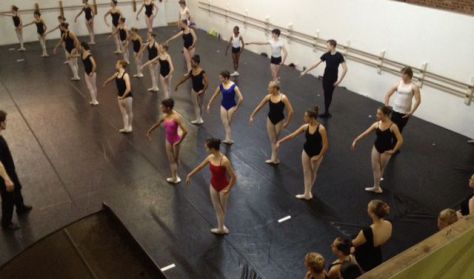 The Florida Ballet at Jacksonville, Inc. (d/b/a The Florida Ballet) was founded in 1978 by Laurie Picinich-Byrd and Michael F. Byrd.  Michael, born and raised in Jacksonville, completed his education at the University of Florida before going to New York City to pursue a professional career in dance.  Laurie had been trained in New York and London, England and was working as a choreographer, teacher and dancer. They met while working at the Metropolitan Opera House. Both had a passion for the arts and a desire to bring dance to a community to enhance the quality of life.  Michael wanted to give back to his home city and so The Florida Ballet at Jacksonville was born!

The Company debuted at the old Civic Auditorium Little Theatre in March of 1979.  In addition to the theater performances, the company dancers also gave educational programs in schools.  The service to Jacksonville’s young people was established from the first season!  The next season a federal grant allowed the dancers to present over 125 in-school programs, in addition to the dance concerts in the theater.

In 1981, several of the city’s dedicated dance students were requesting training from Mr. and Mrs. Byrd.  The directors were well aware of the intense training needed to pursue a professional career.  They added The Florida Ballet Training Center to their already busy schedule.

The Company and newly formed Training Center were given rehearsal space in the old Ivey’s building (now JEA building) in downtown Jacksonville and then at the First Presbyterian Church on Monroe street.  As the company grew, so did the need for a real home.  The Clarkson Company assisted the company in acquiring an historic building on Forsyth Street, directly across the street from the Florida Theatre.  From 1983 to 1989 The Florida Ballet toured throughout the southeast presenting professional quality dance performances.  For three years the Company was the highest funded dance company by the State of Florida through the Department of State’s grants.

As the national economy began to take a downward trend – so did the funding for The Florida Ballet.  With the support of a dedicated Board of Directors, Laurie and Michael reluctantly cut staff, dancers and programming to a minimum.  Although activities were curtailed, theater performances, educational programs and training center classes were continued every year with increased enrollment each and every year.

In 1991 Michael was diagnosed with melanoma.  During the five years of treatment, both he and Laurie divided their time and energies between their family and The Florida Ballet.  In July of 1996 Michael passed away.

In the following years Laurie, as Artistic Director, kept the Company working and the Training Center developing talented dancers.  The Training Center has a 100% acceptance record for those students who go on to the dance programs at a university level! The Training Center boasts graduates who have gone on to professional careers with such companies as The American Ballet Theatre, Orlando Ballet, and the Joffrey Ballet. The Florida Ballet Training Center is proud to include the AMERICAN BALLET THEATRE® National Training Curriculum, a breakthrough 8 level program that combines high quality artistic training with the basics of dancer health and child development. The ABT® National Training Curriculum consists of a comprehensive set of age-appropriate, outcome-based guidelines to provide the highest quality ballet training to dance students of all ages and skill levels. Florida Ballet’s Founding Director, Laurie Picinich-Byrd became certified in all 8 levels of the ABT® curriculum. The Training Center’s mission is to identify northeast Florida’s most talented young men and women and provide them with the professional standard ballet training.  The Ballet Company’s professional performances have thrilled audiences with a unique blend of classic and contemporary works, including the full-length production of “The Nutcracker”.

In the summer 2007, The Florida Ballet was awarded a grant from the Weaver Family Foundation for the purpose meeting urgent financial needs.  Part of this grant was directed toward scholarships in the professional training program for talented students with financial need and part was directed toward strengthening the administrative support staff so as to create a strong future for The Florida Ballet.

Today, the Florida Ballet is housed at 300 East State in downtown Jacksonville.  The facility encompasses three large sprung-floor studios, dressing rooms, professional sound system, and offices for staff.  Staff members include Artistic Director, Administrative Director, Development Director, and 8 full and part-time professional teachers with over 25 years’ experience in dance education.  Many of the faculty are also certified in ABT® curriculum. The Florida Ballet is governed by a volunteer Board of Directors made up of business and civic leaders from across the northeast Florida area and is IRS registered 501(c)(3) organization incorporated in the state of Florida.